At Red Mare Wines, we strive for consistent quality, with vintage expression. If you happen upon one of our library wines out in the world, this is a great place to come to look up notes on older release wines and see our descriptions of each vintage. Select a vintage below and explore.

The growing season of the 2007 Vintage is marked by the larger forces of the La Niña system, beginning with dryer and warmer than usual temperatures. The produced and early bud break and bloom.  The natural concern of spring frost follows, but we were blessed with a quiet frost season. This good set could have resulted in a higher than average crop load, but smaller berries kept things in check, as well as improving phenolics across the board.  The warm spring turned into a cooler-than-usual summer, with temperatures only breaking 100F around Labour Day.  The result was a beautifully growing season, with fabulous acid retention and complexity in the fruit.  The heat near the end of the maturation curved pushed ripeness and no doubt resulted in some riper characters, depending on the site.

The 2008 vintage was a wild ride.  To describe it as 'challenging' is an understatement.  Yet, even with these challenges, or perhaps because of them, 2008 has produced exceptional wines.  The larger La Niña weather pattern, which we'd experience in 2007, delivered an early dry Spring, contributing to a growing drought scenario and early bud break.  Extended frost events, the worst experienced in several decades, took their tole, while high wind events also damaged young shoots in some places.  These factors delayed the vines in many locations and resulted in a low crop level.  Dry soils lead to scant canopies, and small berries, further contributing to low yields. When summer did break, it was kind to us with cool days.  We were thankful for those small canopies which allowed good exposure.  Though the roller coaster was not yet over.  Late August and early September gave us several sustained heat spikes, pushing ripeness. Mid-September cooled, and we were not to see temperatures much above 90 for the rest of the year.  The days around harvest were cool, allowing the final ripening process to be slow and steady, even if the vintage as a whole, was not.

After the rollercoaster of the 2008 vintage, 2009 was a welcome respite. This vintage, although not thought of as cold, at the time, was the first of three growing seasons to come, which would be marked as the coldest in decades. A late spring resulted in delayed bud break. The continuation of low rainfall kept canopy and berry size in check, something we would be thankful for later. A cooler-than-average summer with only two heat events over 100F created a steady, near-perfect ripening environment. We were fortunate for these days in August and September because the vintage ended abruptly. In early October, we were visited by an unseasonably powerful and cold rain event. Temperatures were not to recover, and those who had harvested before the rain were happy indeed.

The 2010 vintage brought us out of the dry years with an intensely wet spring. Consistent and abundant rain events persisted into May, delaying bud break and bloom, taking us out of the realm of frost concerns, but pushing back our ripening window. Again summer was marked by consistently cooler than average day time temperatures. These days looked to linger until we were hit on August 23rd and 24th with a notable heat spike, reaching over 110F. This rocked vine development and slowed ripening as vines shut down to protect themselves from the intense heat. Again we swung back to cool temperatures until a push of warmer days in late September marked the end of the season.

It is no secret that the 2011 vintage was perhaps the most challenging vintage that many winemakers and grape growers had yet seen in their careers. It was the coldest and wettest vintage in decades. An unseasonably cool and wet spring extended into June, increasing canopy growth and pumping up berry size. The summer growing season broke with only mild temperatures. Soil profiles were holding water, and the battle against mildew raged. Extensive crop dropping and leaf removal was key to increasing airflow and managing mildew. Harvest decisions were challenging, cooler temperatures and high water availability resulted in lower than usual Brix levels, but the late summer brought warm, damp days, which would only result in increased mildew pressure. It was the most delayed start to a harvest that Napa Valley has seen. In the winery, hard work, slow and intensive sorting, as well as aggressive saignee, were keys to producing lovely wines, expressive of this unique vintage.

After three cool years, the warmer 2012 vintage was extremely welcome.  The Wine Spectator described it as “An ideal season," and they were exactly right. There were no emergencies in 2012, no frost, no unexpected or unwanted rainfall, and no out of the ordinary heat events.  It was undoubtedly the most gently paced, easy-going season in years.  It was the kind of vintage that justifies Napa Valley's reputation as the home of great wines in America.  2012 felt as though we were finally back to normal.  After the unusual years preceding it, everyone was exceedingly happy.  In 2012, we started to source a small amount of non-Cabernet Sauvignon grape varieties and the results were captivating.

2013 was a knockout year; a well-balanced crop and a warm and steady growing season produced outstanding fruit. The three words most used to describe this vintage are, “early, even and excellent.” Like 2012 before it, we were blessed with lovely hang time conditions through October, allowing us to take our time scheduling picks without any significant weather events forcing our hand. It was a year of abundance and high quality.

2014 was the driest year on record in California history, and it is a stunner. Bookended by a God sent early spring rain and a 6.0 Earthquake, 2014 was a reminder to count our blessings. While dry, temperatures were relatively mild, not breaking 100F the entire season. This easy-going growing season allowed us to find the ‘just right’ window of physiological maturity and peak flavors to harvest our vineyards with conditions for ripening, maturation of tannins, and concentration of flavors.

While 2015 was the third in a string of dry years, late winter rains filled the soils, recharging them, which gave the vines an excellent push come spring. We expected a smaller vintage after three years of drought, but the extended and cold weather during bloom, lead to an even lighter crop load as some flowers didn’t develop into berries. This damage during bloom resulted in small, loose clusters, light-weight, yet perfect for producing wines with powerful concentration and lush mature tannins. This balance between crop load and leaf area allowed for excellent dappled sunlight filtration onto the berries, and encouraged the development of complex flavors. Intense hand-work in the vineyard positioning shoots, removing excess leaves, and early crop level management resulted in outstanding wines.

The 2016 vintage is the last of Napa's recent drought years. Luckily, late spring rains helped recharge the soil profile giving a strong start to the season. The early season started well with no frosts or large temperature spikes. After the cool spring of 2015, this uneventful spring was welcome. Mild temperatures continued into August and allowed for outstanding flavor development and retention of acid. 2016's moderate yields and ideal temperatures are apparent with the expressive fruit flavors and freshness showing in the glass.

2017 is perhaps remembered with anxiety for most winemakers in California's North Coast. Warmer nighttime temperatures in March pushed an early bud break for most varieties, setting the stage for the difficulty in April when a hail storm surprised the young shoots. The summer months were filled with lots of little heat storms, the last one in early September, not so little, reaching 106 in "cooler" regions. Thankfully, this was the last, and the heat September broke, yielding to a welcome string of moderate days with a thick marine layer lasting through mid-morning. We only had one-third of our red fruit harvested when on October 8th hot and dry offshore winds fueled the devastating fires which tore through many parts of Napa and Sonoma. The following days and weeks were fraught with difficult decisions for many and tragedy from some. Due to the challenges created by the fire, we decided to declassify over two-thirds of our production. We only bottled wines from grapes brought in before the outbreak of the fires.

2018 was a dreamy vintage. Steady but not torrential rains through the winter gave the soil time to absorb the nourishing moisture. Spring temperatures were right on target with stable temperatures during bud break and bloom, paving the way for a larger than average yield. Our warm summer temperatures peaked in July, with only one day exceeding 100F. Our ripening months, August and September, cooled off a bit, creating a gentle, even ripening track, free of heat storms. October continued the trend of cooling, but temps stayed above the ’70s, allowing for a near-perfect end to the season.

no wines yet released

Consistent spring rains providing a fully recharged soil profile at the beginning of the season. Mother Nature was kind to us, bringing us a mail order spring and an uneventful, bud break. We had one minor heat spike in June, but July and August were mild, with only one day breaking 100F in the middle of August. September continued this remarkably perfect weather pattern, only breaking 90 on four occasions. Nighttime temperatures began to dip a little into the high 30s in October, with patchy morning frosts heralding the beginning of the end of the season. But, daytime temperatures remained in the mid 80’s most days, even breaking 90 on October 24th, the day I picked my last Red Mare Cabernet Sauvignon vineyard. It could not have been a better vintage.

no wines yet released 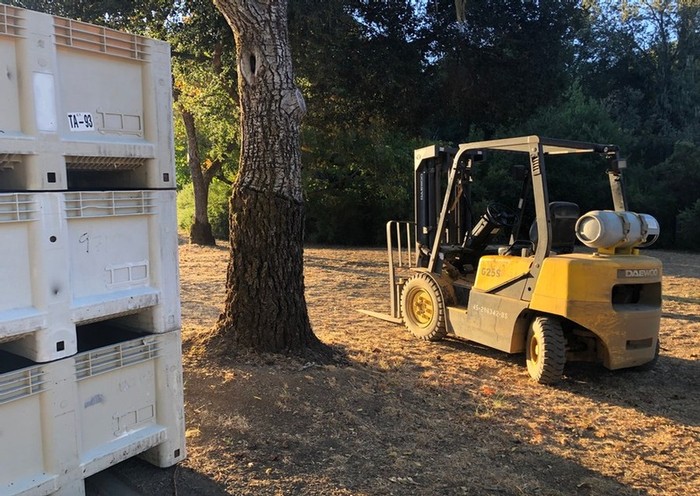 Keep up to date on promotions, wine releases, and events.